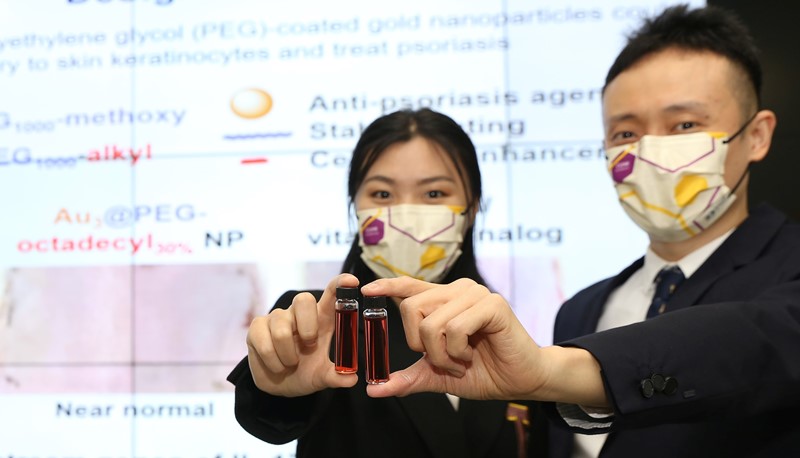 CUHK bio-nanotechnology experts have engineered a gold nanoparticle with the unique ability to enter skin cells and suppress the genetic pathways that cause psoriasis. Animal studies suggested that the new nanoparticle is as effective as standard topical steroid and vitamin D analog-based therapies, but without unpleasant side effects, therefore offering a simple, safe and effective alternative for treating the long-term skin disease. The research findings have been published in Nano Letters.

Psoriasis is a chronic, non-contagious inflammatory disease, characterised by red patches and thick silvery scales on the skin, that affects over 125 million people worldwide. There is no cure for psoriasis at present, only various treatments to manage symptoms. All available treatments have different potential side effects, including hair loss, skin irritation and wrinkling, harm to the liver and kidneys, and even skin cancer.

Realising the promise of nanoparticles

Drug delivery via nanoparticles is an important frontier in treating skin diseases, and various nanoparticle designs have already been developed to load psoriasis-treating drugs such as steroids or biologics into nanoparticles to improve the drug’s delivery to the skin and reduce its toxicity. As yet, however, many of these nanoparticle-based drugs have not been demonstrated to enter and accumulate in skin cells for sustained efficacy; once encapsulated with drug molecules, the nanoparticles would become too large to permeate the thickened psoriatic scales and enter skin cells.

Recently, a team led by Prof. Jonathan Choi of the Department of Biomedical Engineering at CUHK, has developed a new class of nanoparticle that bypasses the bottleneck for drug delivery to skin cells.

Smaller than 15 nm in overall diameter, the newly engineered nanoparticle bears a 3 nm gold core and an outer shell of polymer strands that work to ease its entry into the skin’s cells by preventing gold cores from clumping together in sweat. In mouse trials, the engineered gold nanoparticles were mixed with saline, and a soaking gauze with nanoparticle solution was applied onto the psoriatic skin of mice for topical delivery. These nanoparticles successfully crossed the thickened scales on the skin’s surface and entered the skin cells.

Crucially, the study has revealed for the first time the self-therapeutic value of gold nanoparticles in treating psoriasis. This obviates the need to load drugs into the nanoparticle, as the nanoparticle itself suppresses genes related to the inflammatory process that are critical to the induction of psoriasis, making it effective both in preventing the disease and improving skin condition in mouse models. In addition, this new nanoparticle does not accumulate in major organs four weeks after topical delivery, nor does it cause long-term toxicity in the skin and body.

The research data indicate that the engineered gold nanoparticle could downregulate multiple genes that are related to skin inflammation. It may also have therapeutic potential for other skin inflammatory diseases, such as the more prevalent eczema.

Prof. Choi said, ‘We hope to continue our collaboration with the Faculty of Medicine at the University and perform clinical studies to validate the safety and efficacy of this new gold nanoparticle in humans in the future, so as to offer a new, safe and effective treatment for psoriasis patients.’