Cut back on meat could help China breathe easier 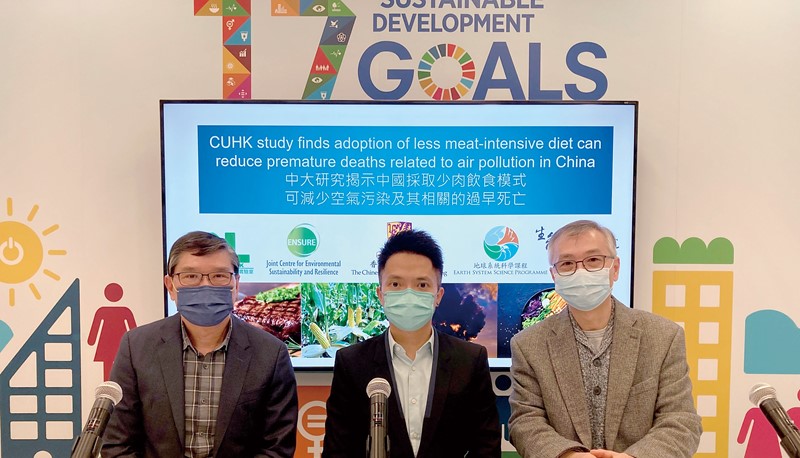 A study led by Prof. Amos Tai (middle) suggests that switching to plant-based diets can significantly improve both human and environmental health.

A groundbreaking cross-disciplinary study led by CUHK and the University of Exeter (Exeter) has shown that higher meat consumption poses immediate health risks to everyone and not just to meat eaters. The research links rising meat consumption in China to dangerous air pollution that leads to tens of thousands of premature deaths each year.

Conducted by the CUHK–Exeter Joint Centre for Environmental Sustainability and Resilience (ENSURE), the research provides undebatable evidence that switching to plant-based diets can significantly improve both human and environmental health. The research was recently published in Nature Food.

Rapid economic and population growth in China from the 1980s onwards, as well as a nationwide shift from a plant-based towards a meat-intensive diet, have made China the world’s largest meat consumer, with annual meat production increasing from 15 to 80 megatons between 1980 and 2010.

It is widely known that those who consume more meat may run higher risks of diet-related health issues such as cardiovascular diseases, diabetes and obesity, and that meat production contributes to greenhouse gas emissions and climate change. What this study reveals, however, is how higher meat production also causes serious air pollution from particulate matter, which has long been a major environmental health problem in China. Animal waste and fertilisers for feed crops both release substantial amounts of ammonia gas into the air, leading to the formation of particulate matter. 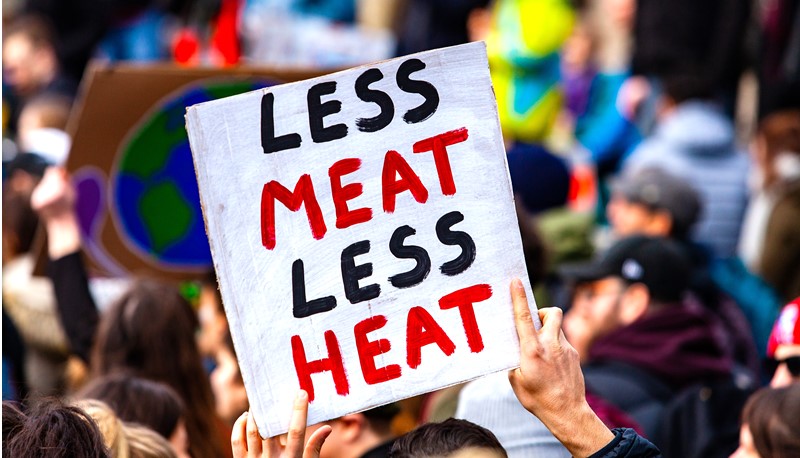 The study finds that changes in the Chinese diet have increased ammonia emissions from the agricultural sector by 63% and increased annual mean particulate matter concentration by up to 10 micrograms per cubic metre between 1980 and 2010, which is roughly 20% of the total increase over the same period from all sources.

‘This has led to approximately 90,000 more air pollution-related premature deaths every year,’ explained Prof. Amos Tai of the Earth System Science Programme at CUHK and leader of the study.

The study estimates that if the average Chinese diet is replaced by the less meat-intensive diet recommended by the 2016 Chinese Dietary Guideline, ammonia emissions would decrease by about 20% and particulate matter by up to 6 micrograms per cubic metre, and 75,000 premature deaths related to air pollution in China would be avoided each year.

This global study has been made possible with the support of ENSURE. Found in 2018, ENSURE aims to tackle emerging issues related to the changing environment and their effects on human health and wellbeing by developing large-scale collaborative projects that promote research excellence. It has made substantial progress in a number of collaborative projects and engaged over 40 researchers in the fields of earth system science, economics, environment and energy, geography, law, life sciences, mathematics, public health, and public policy, making significant impact on climate research to address sustainability challenges.

Prof. Hon-Ming Lam of the School of Life Sciences at CUHK said, ‘The project is a good example to demonstrate the importance of cross-disciplinary research. The global model of atmospheric changes is now connected to grassroots agricultural production and people’s daily diets.’