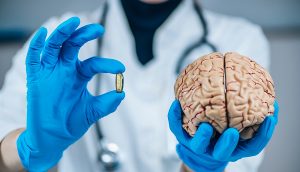 The neurological benefits of the diabetes drugs open up the possibility of creating pharmaceutical interventions that stop and reverse brain ageing.

A health science researcher Professor Owen Ko from the Faculty of Medicine at CUHK has opened up a new front in the battle against age-related neurological conditions such as dementia, Alzheimer’s disease and Parkinson’s disease. Professor Ko’s team has demonstrated that a class of drugs originally developed to treat Type 2 diabetes can halt and even reverse brain-cell ageing, a discovery that could instruct clinical trial design and lead to the development of new drug treatments for neurodegenerative disorders.

The new research, however, opens up the possibility of creating pharmaceutical interventions that stop and reverse degeneration by strengthening the body’s blood-brain barrier, which prevents unintended and harmful substances from crossing into the brain.

The idea for the project arose when Professor Ko and other researchers noticed that the risk of developing Alzheimer’s or Parkinson’s is lower for diabetic patients treated with drugs that target the GLP-1R gene or glucagon-like peptide-1 receptors.

‘We learnt that the drugs have unexpected neurological benefits,’ Professor Ko explains. ‘This brings up a lot of interesting questions. If we understand how that happens, can we extend the use of the drug to benefit another class of patients? And if we understand the mechanisms, can we develop something with even better effect?’

To do this, Professor Ko’s team isolated and studied nervous tissue and vascular cells from mouse brains using a technique known as single-cell RNA sequencing. Both types of cell deteriorate with age, but the research found that treatment with a GLP-1R drug can halt or reverse such deterioration. This includes the effect of restoring the integrity of the blood-brain barrier, which may make it less likely for an ageing brain to degenerate further.

One highly encouraging aspect of this class of drugs is that it restores molecular changes of the brain in general, so it can potentially benefit a wide range of ageing people. The team is in the processing of filing to launch clinical trials in humans. 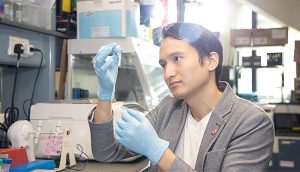 Professor Owen Ko is a winner of the Croucher Innovation Award 2020.

Last December, Professor Ko won the Croucher Innovation Award 2020 for his outstanding achievements in neuroscience research. The award aims to identify exceptionally talented scientists working at an internationally competitive level and to offer substantial support to these ‘rising stars’ at a formative stage in their careers. With the support of this award, Professor Ko’s team will deepen their research into the causal mechanisms between cell dysfunction and age-related neurodegenerative disorders, with the aim of identifying new disease-modifying therapeutics.