Powering the Next Wave of ‘Blue Energy’ Technology 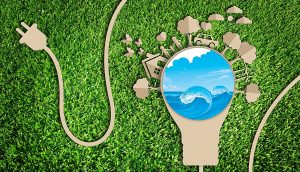 The ocean covers about 70% of the Earth’s surface area and is our largest reservoir of energy. Converting the movement of ocean waves into electricity efficiently has been a longstanding challenge. Researchers from the Faculty of Engineering at CUHK have made an important technological breakthrough in the quest to harness ‘blue energy’ from the world’s oceans, taking us one step closer to solving the global energy and climate crisis.

The CUHK team has developed an innovative water-tube-based nanogenerator that converts irregular, low-frequency environmental energies (including ocean wave energy) into electricity. The research results have been published in the internationally renowned journal Advanced Energy Materials.

Conventional nanogenerators harvest ocean wave energy by bringing solid surfaces into contact, which then generate an electrical charge. However, it is difficult to ensure the contact affinity between those surfaces. Surface materials also tend to experience long-term wear and tear. In addition, conventional nanogenerators typically require shell structures and mechanical components such as springs, holders and rotors, which reduce the efficiency of energy harvesting.

The research team led by Professor Yunlong Zi of the Department of Mechanical and Automation Engineering has overcome these technical limitations by developing a nanogenerator based on finger-sized tubes that hold water.

Electric currents are generated when water moves between the two electrodes that are wrapped outside of the tube. As the water and the tube surface remain in close contact, the new technology generates electric charge at an efficiency that exceeds all previous recorded levels. Also, given that water is a more flexible substance than solid materials, the new nanogenerator can be used to capture energy from a broad range of mechanical movements, including rotation, swing, seesaw and horizontal linear motions. This makes it potentially useful not just for harvesting ocean wave energy, but also wind, body and vehicle movements.

Moreover, multiple small units of the new nanogenerator can be easily combined and integrated into one larger unit and thus multiply electric output. When testing the new technology, researchers designed two power generation units: a box comprising 34 units which was placed in the sea to collect ocean wave energy, and a wristband made up of 10 units that a researcher wore while swinging her arms. The peak power generations of the two tests were both enough to drive 150 LED light bulbs.

Multiple small units of the new nanogenerator are integrated into one larger unit and placed in the sea to collect ocean wave energy. The peak power generations are enough to drive 150 LED light bulbs.

‘Previous designs of ocean energy harvesters have been equipped with electromagnetic-based generators which are large in size and heavy, and will only generate power if the frequency of ocean waves reaches a certain high level,’ explains Professor Zi. ‘Our latest research has overcome the technical hurdles and will promote the use of nanogenerators, especially in “blue energy” harvesting, offering a new direction for the development of renewable energy to achieve carbon neutrality.’