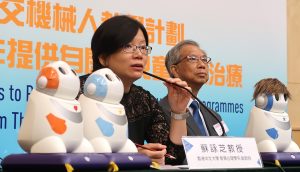 Professor Catherine So has been appointed as the only Hong Kong representative of INSAR to strengthen collaboration on autism research between local and international institutions.

Professor Catherine So of the Department of Educational Psychology at CUHK has been appointed by the International Society for Autism Research (INSAR), a leading global autism research body, as its sole Global Senior Leader for Hong Kong. Professor So pioneered a novel robot-based training programme to help improve the nonverbal communication skills of children with autism.

The number of confirmed child autism cases in Hong Kong has been rising rapidly over the past ten years, reaching nearly 10,000 cases in 2018–19. Autism can slow children’s learning and social development, with many children with autism developing social and emotional issues.

By studying children’s language and cognitive development, Professor So found that children with autism have a relatively weak understanding of gestures and tend to develop nonverbal communication skills later than other children. This is partly because children with autism often find human emotions and expressions too complicated to understand, causing them to become overwhelmed in social interactions.

An Ingenious Approach to Autism Intervention

To address this, Professor So developed the Robot for Autism Behavioural Intervention (RABI) programme in 2015. Initially, RABI used social robots called NAO to help children with autism learn how to communicate with gestures. The human-like robots perform iconic and conventional gestures, training children to recognise and learn gestural movements without overwhelming them with human facial expressions. Since 2018, RABI has been using social robots, HUMANE, to train children with autism other kinds of social skills, such as narration, joint attention, play behaviors, and conversation.

The use of robots is a significant innovation for both healthcare and special needs education. The programme has now served more than 1,200 individuals with autism aged 3 to 18, helping them to improve their nonverbal communication and boost their emotional wellbeing. A recent version of the programme features robots performing dramas in order to educate children with autism about socially appropriate behaviours. 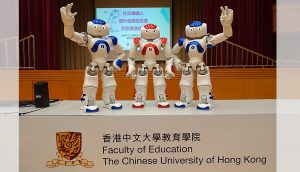 The robot-based training programme has served more than 1,200 children with autism.

Professor So remarked, ‘It is my privilege to be appointed the Hong Kong representative of INSAR. CUHK will be the research base promoting and leading autistic research and academic links in Hong Kong and the Asia-Pacific region. We aim to build an autism behavioural and social communication database, eventually providing tailor-made and evidence-based intervention therapies to each individual with autism.’

With the support of CUHK’s Sustainable Knowledge Transfer Project Fund, Professor So and her colleague Dr. Sarah Luk have expanded the programme and established a social enterprise to serve the wider autism community. The achievements of Professor So and her team were recognised with the Smart People Merit Award at the Hong Kong ICT Awards 2018 which promotes outstanding information and communications technology (ICT) inventions and applications.