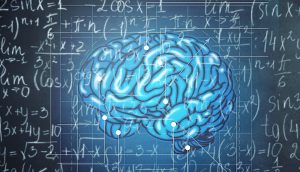 A research breakthrough by applying mathematics in translating MRI scans of a brain surface into a sphere in less than a second.

Professor Ronald Lui from the Department of Mathematics at CUHK has broken new ground by applying pure mathematics to create accurate 3D images of the brain’s surfaces. This technique overcomes the limitations of traditional 2D magnetic resonance imaging (MRI) scans.

MRI scans provide doctors with 2D images, essentially visual ‘slices’ of the patient’s brain. But Professor Lui explains one thing is missing. ‘You have lost all the geometry. When you look at the brain, there is a lot of geometry, ridges and depressions, and this is very important for analysis. So is it possible for us to reconstruct this 3D surface?’ shares Professor Lui.

Together with collaborators from various fields, Professor Lui was among the first to study how an esoteric mathematical theory known as computational quasi-conformal geometry (CQC) could be applied to medical imaging. To do this, he developed models which capture the boundaries of an object found in a series of 2D images and combined them to produce a detailed 3D image. 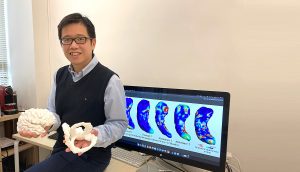 An early breakthrough came in 2011 when he used this method to create accurate 3D models of the inner ear, in order to help understand how a poor sense of balance in young children can lead to spinal distortion. It was the first time this had been done anywhere in the world.

Mapping the brain, however, presents a much bigger challenge. ‘There are lots of ridges and valleys in the brain and doctors can use the human eye and identify fingerprints on these features when they see them, which is amazing. But I figure there has to be some mathematical equation by which we can map them so they can see them clearly,’ says Professor Lui.

In 2010, he developed a computational algorithm that could compute a map of a complicated brain in 20 minutes. By 2020, the time had been reduced to just one second.

In this method, a brain surface obtained from MRI scans is translated in real time into a sphere which rotates on the screen, revealing the whole topography of the brain. Doctors can thus immediately identify ‘fingerprints’ to work from. Professor Lui also worked with doctors to design a user-friendly software interface that allows them to easily access useful analysis and 3D images, without needing any knowledge of the underlying mathematics.

This year, his team has sped up the 3D imaging process to less than a second through the use of deep learning and AI. ‘This is very important because now we have big data,’ he explains. ‘When I was a PhD student the data was limited to 50 to 100 brains. Now, we are talking about dealing with 1,000 to 2,000 brain surfaces.’

Professor Lui is now working with the Faculty of Medicine at CUHK to use CQC modelling to identify the risk of sleep apnea in children, as well as to identify and forecast the risk of dementia.