A Giant Step for Endoscopy 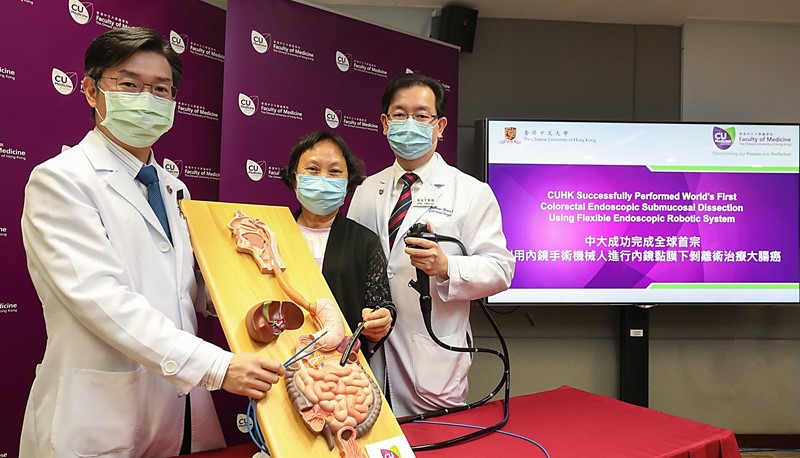 CUHK is at the forefront of a new era in therapeutic endoscopy after performing the world’s first colorectal Endoscopic Submucosal Dissection (ESD) using a flexible endoscopic robotic system known as the EndoMaster EASE (Endoluminal Access Surgical Efficacy) System. Receiving much public attention and recognition from experts, this scientific breakthrough was listed as one of the ‘2020 Top Ten Innovative News in Hong Kong’.

Colorectal cancer is the third most common cancer in the world as well as the second leading cause of cancer-associated death according to the World Health Organization. In Hong Kong, it is the most common cancer. In light of this, the Hong Kong Government has implemented a population-based colorectal cancer screening programme to allow early-stage diagnosis. For patients in the early stages, ESD, carried out with the help of a long, flexible camera, known as an endoscope, is one of the main treatment options.

The Challenges with ESD Procedures

While ESD is a less-invasive endoscopic treatment for early gastrointestinal cancer when compared to conventional surgical treatments such as open or laparoscopic resections, challenges remain. The ESD procedure has a relatively higher risk of perforation due to the long and winding shape of the colon and the thin colonic wall. The design of the traditional endoscope with the attached dissection knife allows only single degree movement, which makes ESD difficult to perform. With a growing demand for ESD, the team at CUHK set about redefining ESD technology.

Improving the Safety and Efficacy of ESD

CU Medicine has been collaborating with researchers from Singapore since 2010 to develop a flexible endoscopic robotic system to enhance the safety and efficacy of ESD in treating early gastrointestinal cancer. Building on the success in 2011 in performing ESD for early gastric cancer treatment with the first prototype flexible endoscopic robot, CU Medicine has further developed the technology and invented the EndoMaster EASE System. Initial observation indicates that the enhanced system is a promising resource for medical professionals.

The EndoMaster EASE System consists of an independently-designed flexible platform with an endoscopic imaging system, and allows the passage of two minute robotic arms to achieve tissue retraction and dissection. It mitigates technical difficulties commonly encountered in endoscopy, such as hindered visibility, to enhance the safety of submucosal dissection.

To date, 18 patients have been successfully treated by colorectal ESD using the EndoMaster EASE System. This novel flexible endoscopic robotic system marks a new era in therapeutic endoscopy, and encourages more endoscopists to learn and perform safe ESD for the treatment of early gastrointestinal cancer.

CUHK is a pioneer in medical robotics, particularly in minimally invasive and endoscopic surgery. A number of research centres including the Chow Yuk Ho Technology Centre for Innovative Medicine and T Stone Robotics Institute conduct research to apply and advance robotic applications to medicine by working in concert with experts in engineering, medicine and social science.